Dwight Eisenhower, the 34th President of the United States, had a simple but effective method for prioritizing what he needed to do every day. One of his most famous tools is the Eisenhower Box. The Eisenhower Box forces you to determine whether something is urgent, important, both, or neither, and then deal with the task appropriately.

2. Important – this means it has serious consequences for some outcome that matters to you (like your grade in a class, your sports eligibility, your GPA, your housing situation, your employment situation – and these are just a few examples).

4. Neither – it can wait, or perhaps it doesn’t need to be done at all.

James Clear (at jamesclear.com) organizes his Eisenhower Box this way. 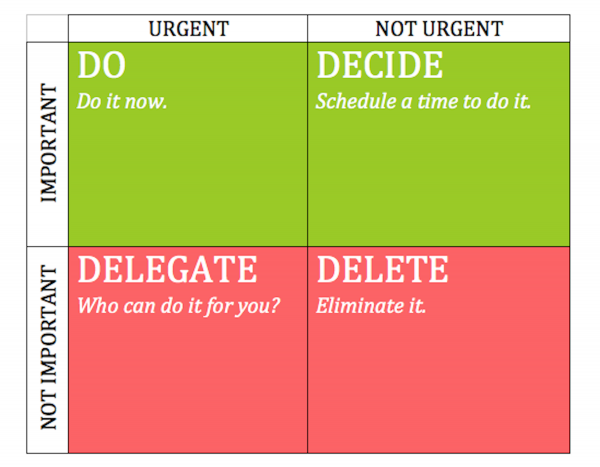 The Eisenhower Box allows you to ask two important questions about all the tasks, jobs, activities and obligations that are pressing in on you, and then decide, based on the answers, what actually goes in each of these boxes.

1. Will doing this help me accomplish my goals?

For this, you need to identify the goals. Look at each thing on your to-do list, and ask yourself: Will doing this activity, task, or job help you achieve a goal that you need to achieve?

2. Do I actually need to be doing this (does it have to be me who does it)?

If you’re a college student and it’s a class assignment, the answer to this is probably yes. But if it’s a trip to the store, you might not need to be the one who does it.

– If it doesn’t have to be you, and it has no real consequences for any of your goals, it goes in the “DELETE” box.

Let’s take the to-do list we created earlier, and do some prioritizing with the Eisenhower Box. 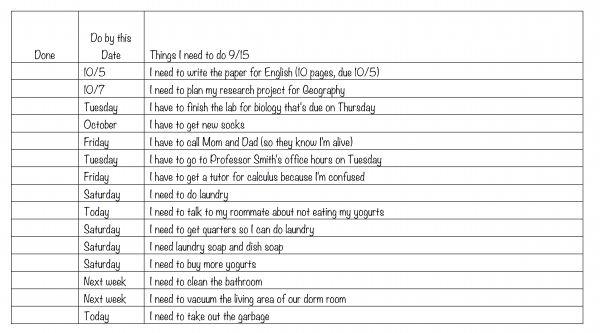 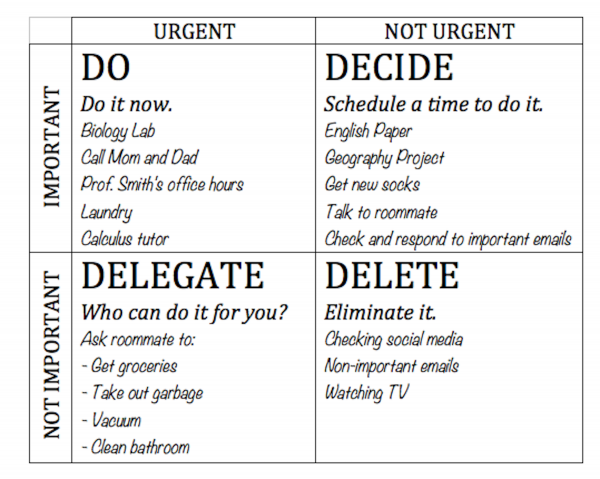 Notice that you now know what’s really important and urgent, what needs to get planned out and scheduled, and what you can ask other people to do. If you’ve been the grocery-getter and chore-performer for the last six weeks, maybe it’s time for your roomie to pull their weight – delegate those tasks to them for a week or two. And notice how much time you’re spending on things that aren’t helping you achieve your goals – and delete them. 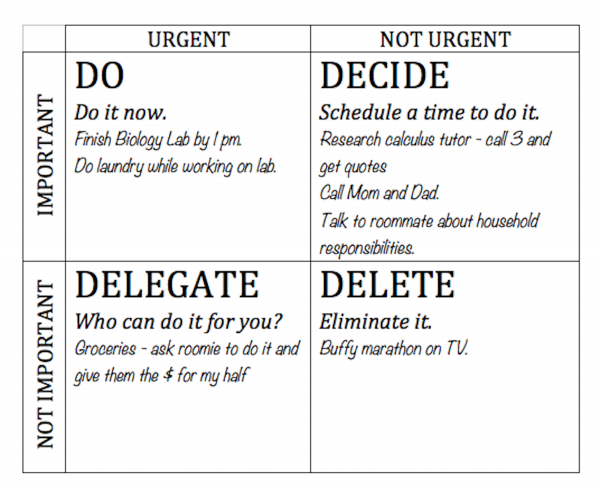 You have a complete list of tasks! Now it’s time to put them all in your planner and on your wall calendar. We’ll cover that in the final blog in this series.

Meantime, tell me what you think! You can email me or leave a comment below – and I look forward to hearing from you!