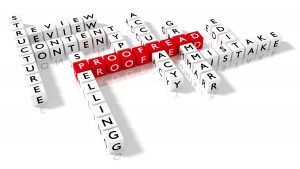 Many students today tend to “write like they talk.” This means that their writing may not take notice of things like spelling and sound-alike words. In a first draft, that’s understandable.

Some students don’t realize that the word they wrote isn’t the word they meant to use. Others are hoping for the best, because they don’t know which word is the right word. Still others trusted the spell-checking software and they really, really shouldn’t have.

But when you turn in your final draft, it’s a good idea to check for spelling mistakes as part of the proofreading process.

In this post, you’ll find some tools to help you with the ongoing problem of sound-alike words, how to make sure you’re using the right one, and how to deal with the unhelpful spell-checker by using a dictionary and the Internet. 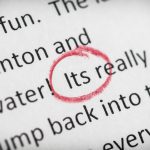 Here are some of the most common sound-alike words that students mistake for each other when they write. Use this list to help you check your work for them and make sure you’re using the correct word before you turn in your final draft!

Using Words in Sentences to See the Differences 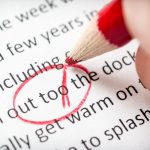 Another way to catch sound-alike words is to create sentences that use all of them, so you can see how each one is used. Here’s some examples to use:

They’re going to their house because you’re not there.

She had to accept that she could have all the books except the one she needed.

The effect of the change was that he was badly affected.

Two of them went to her house, too.

After you lose weight, your clothing becomes loose.

The driver missed the turnoff in the mist.

The plain package was inspected before it was allowed onto the plane.

She has to pare a pair of pears.

We heard a herd of elephants approaching.

If you can hear me, come over here.

He felt he had passed this way in the past.

Other Resources to Find the Right Spelling

The dictionary, believe it or not, is your friend. I know, it sounds ridiculous to be told “Go look it up in the dictionary” when you don’t know how to spell a word, right? But there are some clues you can use to narrow it down.

If you can’t find it in the dictionary, try searching the Internet. For example, when I go to Google and type “spell farmacy” into the search bar, Google comes back with “Showing results for spell pharmacy” and the first result is the dictionary definition of “pharmacy,” which helps me figure out whether that’s the word I was looking for.

In the case of sound-alike words, typing “spell to” will tell you what the word “to” means, and you can decide whether it’s the word you need (or if you actually need “two” or “too” instead).

One caution: Spell check is NOT your friend! It can help you see which words you’ve misspelled, but don’t trust its suggestions, unless you know what the suggestion means. Spell-checking software doesn’t check the context of the sentence to figure out what word you meant to type; it simply assumes that you made a typo, that you already know how to spell the word, and that when shown you typed it incorrectly, you can pick the correct word from a list of possible words. This can lead to some funny (but embarrassing!) errors if you trust your spell-checking software.

For example, I once had a student turn in a paper that confused “condemn” with “commend,” which led to the amusing claim that “Criminals have been commended for their actions throughout history.”

Another student turned in a paper where the spell-checker changed “indigenous” to “igneous” and “sedentary” to “sedimentary.” The writer was a geology student.

Don’t make these mistakes. If the spell-checker says a word is not spelled correctly, go to the dictionary and make sure that its suggestion for a replacement is the right word!

Yes, writing can be stressful, but you almost always have the chance to check your work before you turn it in. Make this visit with the dictionary part of your standard routine when you’re going over your paper before turning it in. You’ll improve your grade and impress your teacher – win-win!