How to Stick To It: If Only I Knew It!

I freely admit it: Sometimes I have trouble keeping myself faithful to the goals I’ve set.

I’ll write something in a planner with the best of intentions, and two weeks later, I’ll realize I never followed through. I’ll take my big project, break it down into steps, schedule it… and then put the planner on the corner of my desk to gather dust. 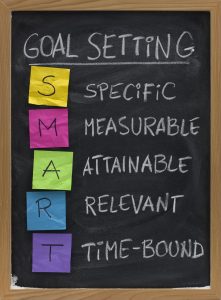 Yeah, I even tried the SMART Goal technique…

How do you keep yourself on track? I’ve tried timers, reminders, alarms, guilt-tripping myself, rewarding myself, and a ton of other methods – none of which worked.

To put it bluntly, this is embarrassing! I have a Ph.D. and I’m a person who coaches other people in things like time management – and yet here I am, not practicing what I teach.

I also have a slight, barely perceptible tendency to read any book I can find on self-improvement. (Okay, it might be really obvious, but bear with me.) I’ll go to Barnes and Noble and immediately head to the New Releases section, looking for self-improvement tips and tricks on book form. In the last couple of months, I’ve blazed through most of Jen Sincero’s “You Are A Badass” series, read all of Brené Brown’s books, and, most recently, picked up “Maybe It’s You” by Lauren Handel Zander.

I’m not exaggerating when I say this book has literally changed my life.

Zander says that if you have trouble following through, it’s time to set a consequence.

You read that right. Not a reward. A consequence.

Her position is that consequences are far more motivating than rewards, because we’re more likely to pay attention to them. It made sense to me, even as it made me uncomfortable to think about doing it. I could think of things I’d really, really rather not have to deal with even as I read about other people she’s coached who have had to deal with them.

So I knew that she was on the right track. The very fact that I didn’t want to do this told me that I needed to.

Is It Really That Simple? 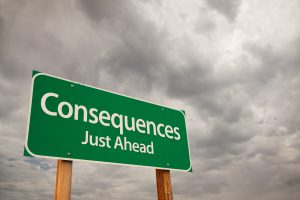 It really is! Setting consequences for myself seems to tap into something in my brain that really, really doesn’t want to deal with the consequence.

As far as I can see, there are three qualities this consequence has to have, and you need all three of them for it to work.

First, the consequence has to take away something you would normally get, or force you to do something you really don’t want to do. Zander makes a good point: we will do a lot more to hold on to something we’re used to having than we will to get something we’ve never gotten before, and we will do a lot to avoid an uncomfortable situation.  If you can’t get by without your daily can of Monster, or if you can’t imagine going out of the house without makeup on, or if you would rather die than sing karaoke (because it would take away your intense need to hide from other people) – well, then you know what your consequence has to be, right?

Can I Get An Example?

In my case, I’m trying to learn Hebrew using Duolingo. I’m also a person who can’t get by without his morning cup of coffee – but I hate black coffee.

So the logical consequence for missing a day of Duolingo practice? The next day, I have to drink my coffee black. No cream, no creamer, no milk – no “adulterations,” as my father would have called it.

I’ve only made this mistake once since I set the consequence. I got home from work, got involved with something on the Internet, and completely spaced on doing my Duolingo. Having to drink my coffee black the next morning made me very, very, very motivated to avoid having to do that again! (And I’m racking up the XP on Duolingo every day.)

I’ve suggested this technique to my students, and several of them have told me that they’ve set consequences for themselves and have seen greater success at sticking to their goals than before. Friends of mine are using the technique too, and accomplishing more than they ever thought they could.

As you can probably tell, I suggest this technique to you. Pick something you know you want to do, or should do, or need to do – but are not doing. Then set a logical consequence that makes you squirm for not doing the thing you need to do. Finally, tell someone about it so that you’ll be held accountable.

It changed my life. I’ll bet it can change yours, too!

I’d love to hear how this works for you! Feel free to leave me a comment below, or send me an email at adam@undergradeasier.com.